Collection of expired medicines from the population will begin in Minsk

Thanks to the SGP Belarus and other donors collection of expired medicines from the population will begin in Minsk. This decision was made by the Minsk City Council of Deputies. Now they are deciding who will organize the hazardous waste collection system, and Ecoidea.by is figuring out how this should ideally be.

We would like to remind you that before, unnecessary medicines in the capital could be left in only one place - in polyclinic No.40. Two years ago, the Center for Environmental Solutions installed an experimental container there.

“This was an important (though not the only) step in developing a system for the collection and disposal of expired medicines from the population in Belarus. It was necessary to understand whether people would start bringing medicines, how much such waste could be collected, what kind of waste it would be. Only after answering these questions, it was possible to think about designing an entire system, and in the future, about spreading this experience in Minsk and beyond,” comments Natallia Blyschik, an employee of the program on chemical safety and waste at the Center for Environmental Solutions.

Now what? Now the Minsk City Executive Committee is deciding technical issues about how a container for medicines should look like, where such containers should be installed, which organization will be responsible for the entire chain - from collection to disposal. Solutions should be found by November 1, 2020, and from April 1, 2021, the system should be fully operational.

“Waste management rules have recently been adjusted. In particular, the Minsk City Committee for Natural Resources and Environmental Protection initiated the emergence of a norm that provides for the collection of medicines separately from other municipal waste,” comments Natallia Blyschik. “In addition, the environmental legislation establishes the priority of waste neutralization in relation to its disposal. This means that the collected medicines (this is hazardous waste) will not go to the landfill, but will be destroyed in special conditions.”

According to Natallia Blyschik, the projected medicine collection system will work effectively if a company specializing in the collection of hazardous waste takes over this business.

“Pharmacies, medical institutions should be considered as places for installing containers into which the population can bring unnecessary medicines, get additional information on the topic. It is in these places that people work who can provide comprehensive information,” the specialist clarifies. “It is not clear whether they will be able to install containers in pharmacies, since there are certain requirements for the sales area of a pharmacy. But it is easier to put containers in medical institutions - there is no direct prohibition on this in the legislation.”

The most important requirement for the design of the container into which unnecessary medicines will be thrown is the impossibility to get something out of it by strangers. It is desirable that all containers in Minsk be the same in color, shape, and have similar markings: this way it will be easier for the population to recognize the container, and in the future - get used to the new practice.

“Undoubtedly, it is very important how Minsk residents will be told about the need to properly dispose of expired contents of the first-aid kit. During the two years that our container was installed in the clinic, we noticed how important it is to explain and show what can and cannot be thrown into the medicine container, why it was installed at all,” recalls an employee of the Center for Environmental Solutions. “Another nuance: at the start, it is important to work out the issue of compensation for the costs of exporting and neutralizing this type of waste, because medicines are not included in the list of goods that are covered by the extended responsibility of the manufacturer. In some countries where the drug collection system is successfully operating, these costs are partially offset by funds created by pharmaceutical companies, partially by local budgets.”

Evgeniy Lobanov, director of the Center for Environmental Solutions, believes that the decision of the Minsk Council of Deputies is an important step in reducing the burden on the environment and on human health, because pharmaceuticals cause pollution of ecosystems, in particular water bodies, which is confirmed by studies.

“Obsolete medicines in the environment are one of the global environmental problems that many countries are thinking about. It is gratifying that this issue is not left unattended in Belarus either: all interested parties are taking serious steps to gradually resolve this problem,” the ecologist summed up.

It is very important that now the state system for the collection of expired drugs works throughout the country.

Waste from medicines in Belarus: how the topic developed 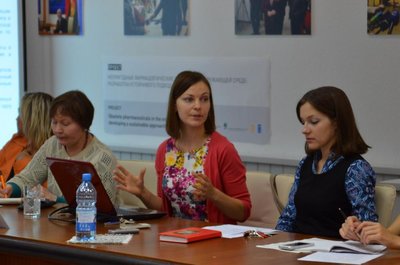 An informational discussion “Problems of collection and utilization of medical waste from the population” was held in Minsk, where there was a talk about the urgency of the problem and environmental problems associated with the release of pharmaceuticals into the environment. 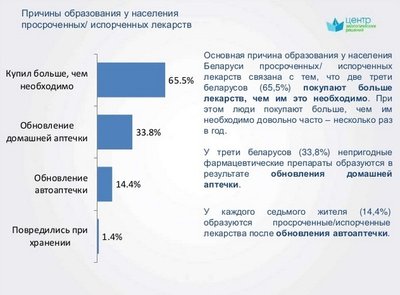 The Center for Environmental Solutions presented a study conducted among the population of Belarus. We managed to find out the basic behavioral tendencies. At the event, they talked about why 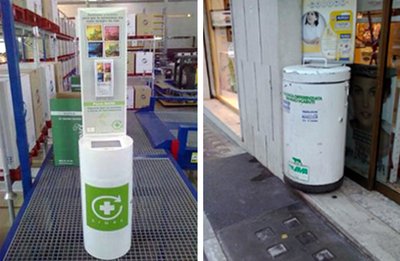 One of the first meetings where experts discuss what a system for collecting medicines from the population might look like. 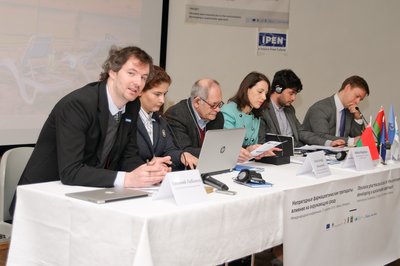 The conference “Unsuitable pharmaceuticals: impact on the environment” was held, where there was a talk about why expired medicines are a problem and how to solve it. 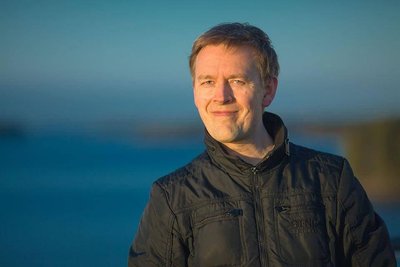 “It is known that the Baltic is one of the most polluted sea regions in the world with hazardous substances,” Mikhail Durkin, Secretary General of the Coalition Clean Baltic, introduces the situation. “Medicines are one of the pollutants.”

The specialist said that in the Baltic Sea basin (by the way, some of the Belarusian rivers belong to it), the total amount of active substances from medicinal preparations is about two thousand tons per year. This is only the amount that “legally” gets into the water - through treatment facilities. Among this number are mainly cardiovascular drugs, drugs intended for the treatment of the central nervous system and anti-inflammatory drugs, in particular, diclofenac, ibuprofen, paracetamol. 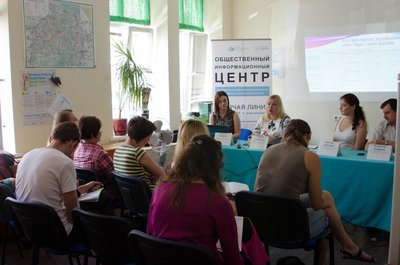 The presentation of the first scientific study on the content of medicinal waste in the Belarusian rivers took place. The Center for Environmental Solutions gathered media representatives to publicize the results of the scientific research. 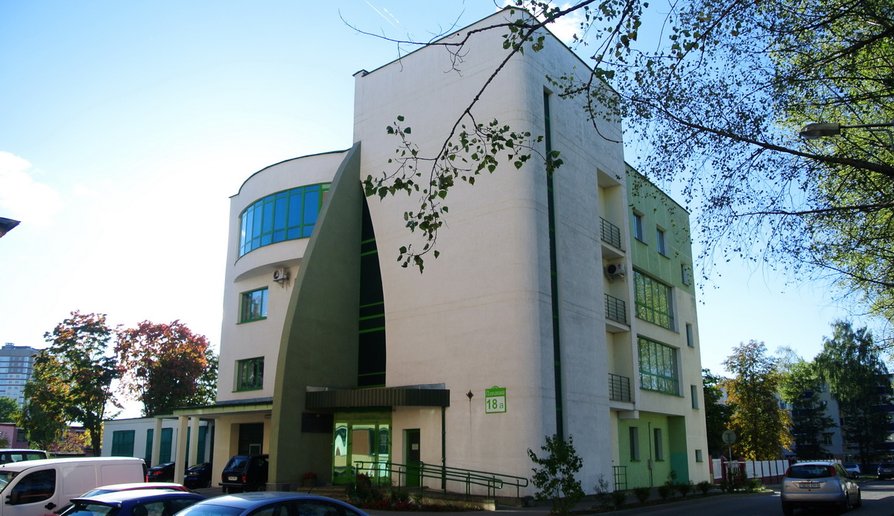 The issue of collecting expired medicines from the population was discussed at the public council under the Minsk City Committee for Natural Resources and Environmental Protection. 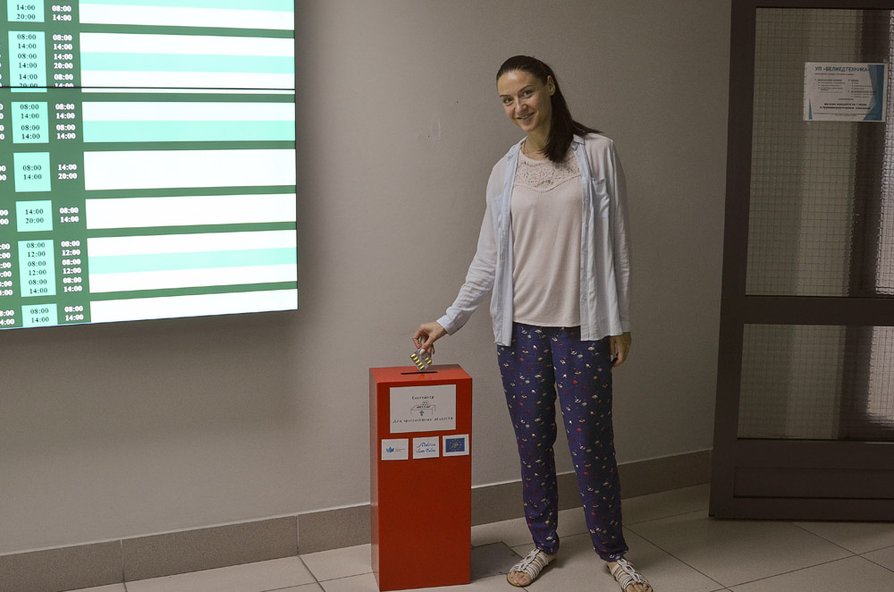 The first container in Belarus to collect expired medicines from the population was installed in Minsk on the basis of 40 polyclinics. This is a pilot project that helped test how a drug collection system might work. 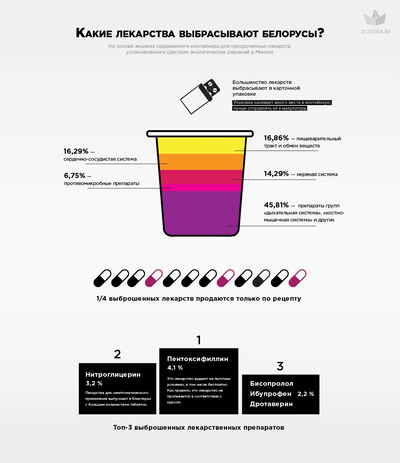 What medicines do Belarusians throw away? The analysis of the effectiveness of the pilot project for the installation of the container was conducted. Recommendations for scaling the project in Minsk and in Belarus as a whole were prepared. 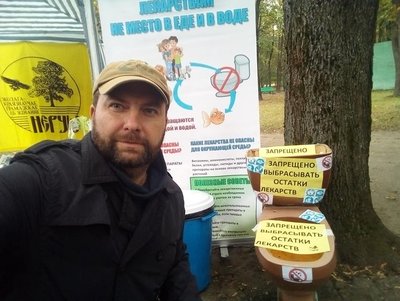 Containers for collecting unnecessary medicines from home first-aid kits are beginning to appear in different regions of Belarus. For example, a meeting place appeared in Baranavičy. 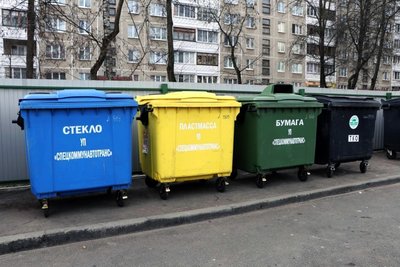 New Rules for the management of municipal waste in Belarus were adopted, which included the treatment of drug waste. 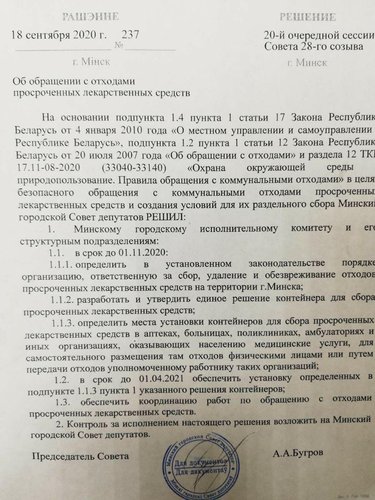 The Minsk City Council of Deputies decided to create a state system for collecting waste of expired medicines from the population.